In addition to the Spoiler information that has been revealed before, the following are the detailed developments appearing in the One Piece manga chapter 1056. 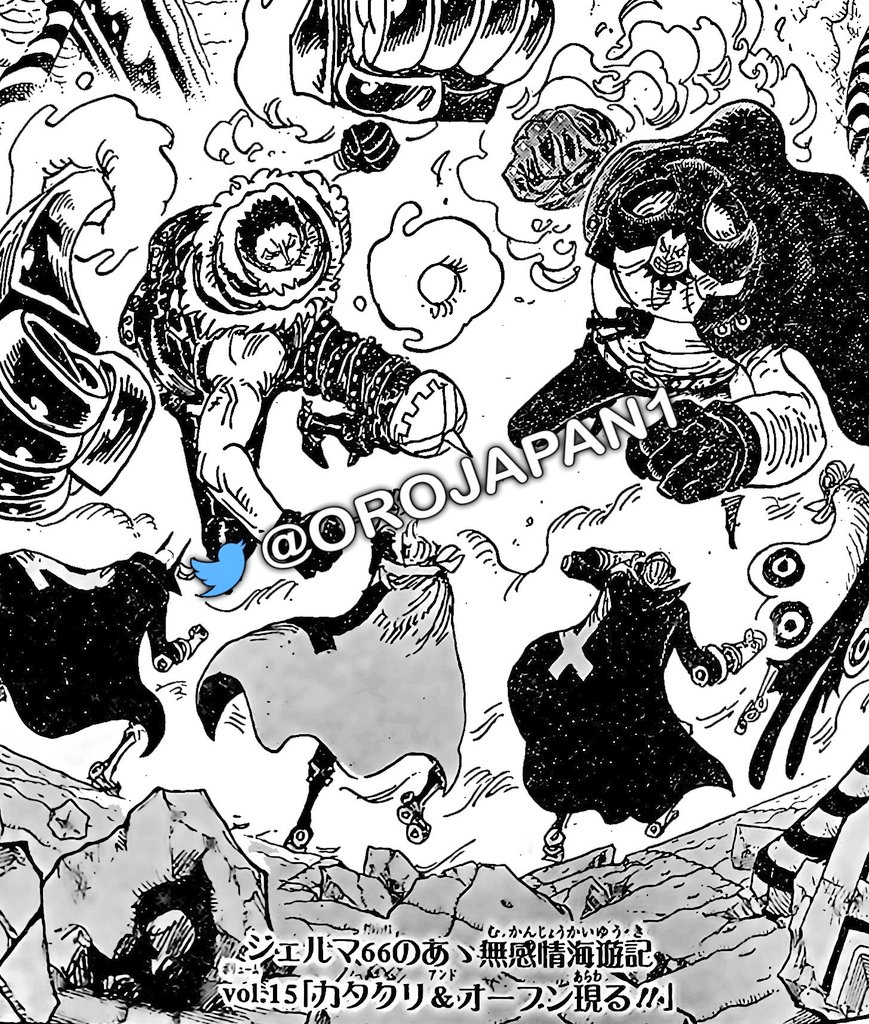 Details of One Piece manga chapter 1056

The cover of One Piece chapter 1056 continues the Germa 66 story with the content: Germa 66 vs Katakurai & Oven.

The banquet in Huadu has ended. Due to the impact of Admiral Ryokugyu’s attack, Raizo and Shinobu became emaciated. The other servants in the Cuu Hong Bao were gathered around the hospital bed and encouraged both of them to try their best. Jiu Hong Bao admitted that what Admiral Ryokugyu said was not wrong, Kaido was the reason why other hostile forces did not dare to look at Wano.

Kinemon apologized to his brothers for being absent from his meeting with Admiral Ryokugyu. Because at that time Kinemon was in the Land of Kuri with his daughter Tsuru. Nekomamushi reassured Kinemon that thanks to Momonosuke’s bravery, the damage of this incident was insignificant, so Kinemon could rest assured. Nekomamushi asked how Ms. Tsuru was now because they had heard before that the town of Okobore where she lived had been burned down by the Holdem of the Beasts. Kinemon shared that his wife had burns on the outside, nothing life-threatening.

At the same time, Mrs. Tsuru is talking to Mrs. Chocho about the return of her husband Kinemon and now he has returned to the capital. Ms. Tsuru said that there is a high chance that she will live in the capital with Kinemon so that the couple can always be together. Returning to the group of Nine Hong Bao, Kinemon praised his wife as still as beautiful as before, but her eyes were full of joy. Inuarashi said that Kinemon and his wife are still very affectionate. Nekomamushi smiled happily for his brother and his wife. Kiku commented that it was really romantic. Raizo was lying on the bed and mumbled that he wanted to be loved like this by others. The scene changes to the Mink Tribe’s warriors. Inuarashi and Nekomamushi send Carrot over. Inuarashi says that Carrot will become the new king of the Mokomo Principality.

After a moment of joy, Carrot calmed down, Carrot gradually realized the importance of the problem and said that I would like to accept it because she felt that she could not shoulder this responsibility. Inuarashi and Nekomamushi say that the two of them are retainers of the Kouzuki clan and that they will have to stay in Wano to protect Momonosuke and the other members of the Nine Red Bao. Inuarashi and Nekomamushi comment that Carrot is one of the few outstanding individuals of the Mink Tribe who have been exposed to the ocean out there, so she already has what it takes for a New Age. Carrot is still very confused and says that the king must be someone strong. At this point, the Captain of the Shishilian Musketeers spoke up, he said it was their duty to protect the country. Wanda tells Carrot that this is the decision of the two kings and that Wanda will be Carrot’s assistant, and Carrot is also the successor to Pedro’s will. Nekomamushi said that he would ask for a hundred things to ask the people who stayed behind to take care of the Mokomo Principality.

The scene changed to Mr. Sukiyaki’s side. Mr. Sukiyaki has a very unexpected reunion with his two grandsons and the retainers of the Kouzuki Family. Momonosuke and Hiyori hug their grandfather, Sukiyaki apologizes and thanks the brothers. Momonosuke said he was overjoyed knowing that one more relative of his was still alive. Mr. Sukiyaki told his retainers that he knew they all recognized their true identities. Kawamatsu said that Tenguyama Hitetsu couldn’t be an ordinary blacksmith, why would he always wear that tengu mask without a festival. Kiku said it would be rude to let it all out. 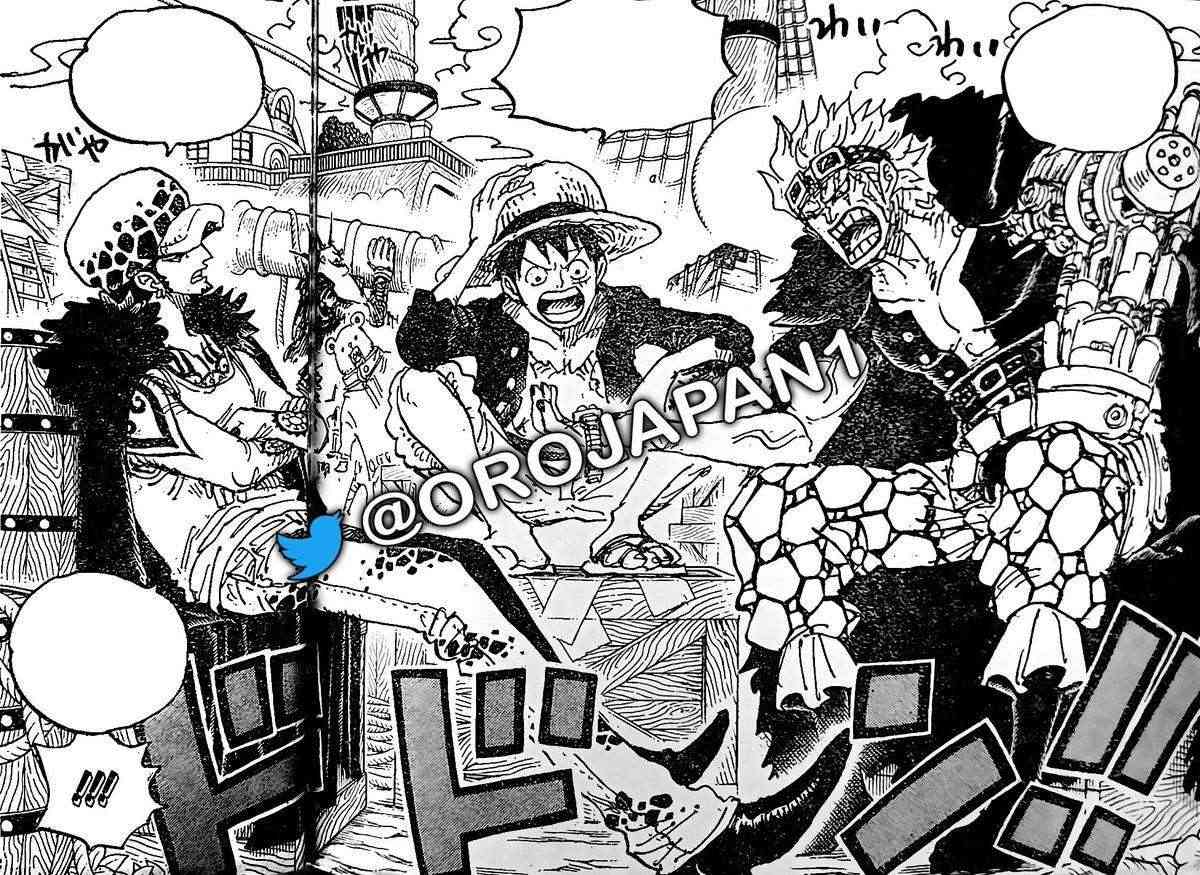 The detailed development of the manga One Piece chapter 1056: The three fortune-tellers with the teacher should set sail on the same day

At this moment, Kinemon alone is still extremely confused because of the surprise, because Kinemon did not think that the blacksmith Tenguyama Hitetsu was the former Shogun Kozuki Sukiyaki in disguise. Sukiyaki told his two grandchildren and his retainers that he had something to tell them. After that, he asked everyone to let him stay in hiding, because Sukiyaki was worried that if he accidentally revealed to the public about him, things would be extremely troublesome. The scene changes to the Straw Hat Pirates, the crew is talking about the ancient weapon Pluton. Franky did not expect that Pluton really existed and that it was hidden in this Wano. Luffy also remembers some information about Pluton.

While the Straw Hats were talking, Mrs. Shinobu and Tama came to visit them. Shinobu has now regained her beautiful figure as in her youth. She asked if the old woman’s beauty was a weapon. Tama is taking the pose of a kunoichi and tells Luffy that Shinobu has accepted him as a student. Tama asked if the next time we meet, when I become stronger, Luffy will accept her as a teammate. Luffy said that if Tama could use ninjutsu, I would agree. Nami ran over and hugged Tama and called her cute.
In that peaceful happy scene, it was revealed that Caribou was eavesdropping on the Straw Hats’ conversation.

Caribou: “Out of Poseidon and then on to Pluton? We have to let “that person” know everything.”

Changing the scene a few days later, the people of Wano Country are enjoying the peaceful scene of the world. Momonosuke was scouting around the capital as the Shogun. Momonosuke was happy to see the children of the capital playing and smiling. Wherever Momonosuke went, everyone there shouted “Shogun”.

Returning to the Castle, Momonosuke rushed to the place where the Straw Hats lived, Momonosuke was looking for Zoro to ask Zoro to teach him swordsmanship. But as soon as he opened the door, Momonosuke found no one in the Straw Hats there. Momonosuke ran around the castle and called out the names of all the members and Yamato but never found anyone there.

After running for a while, Momonosuke met Hiyori, who was teaching Toko to play the shamisen. Momonosuke asked Hiyori where the Straw Hats were, and Hiyori told them that Luffy and his teammates had already left for the harbor after saying goodbye to everyone.
This made Momonosuke extremely surprised because it was such a big thing that no one told him. Kin’emon also rushed in and wondered just like Momonosuke. The other retainers in the Nine Hong Bao group also said their goodbyes to the Straw Hats, leaving only Momonosuke and Kinemon left. 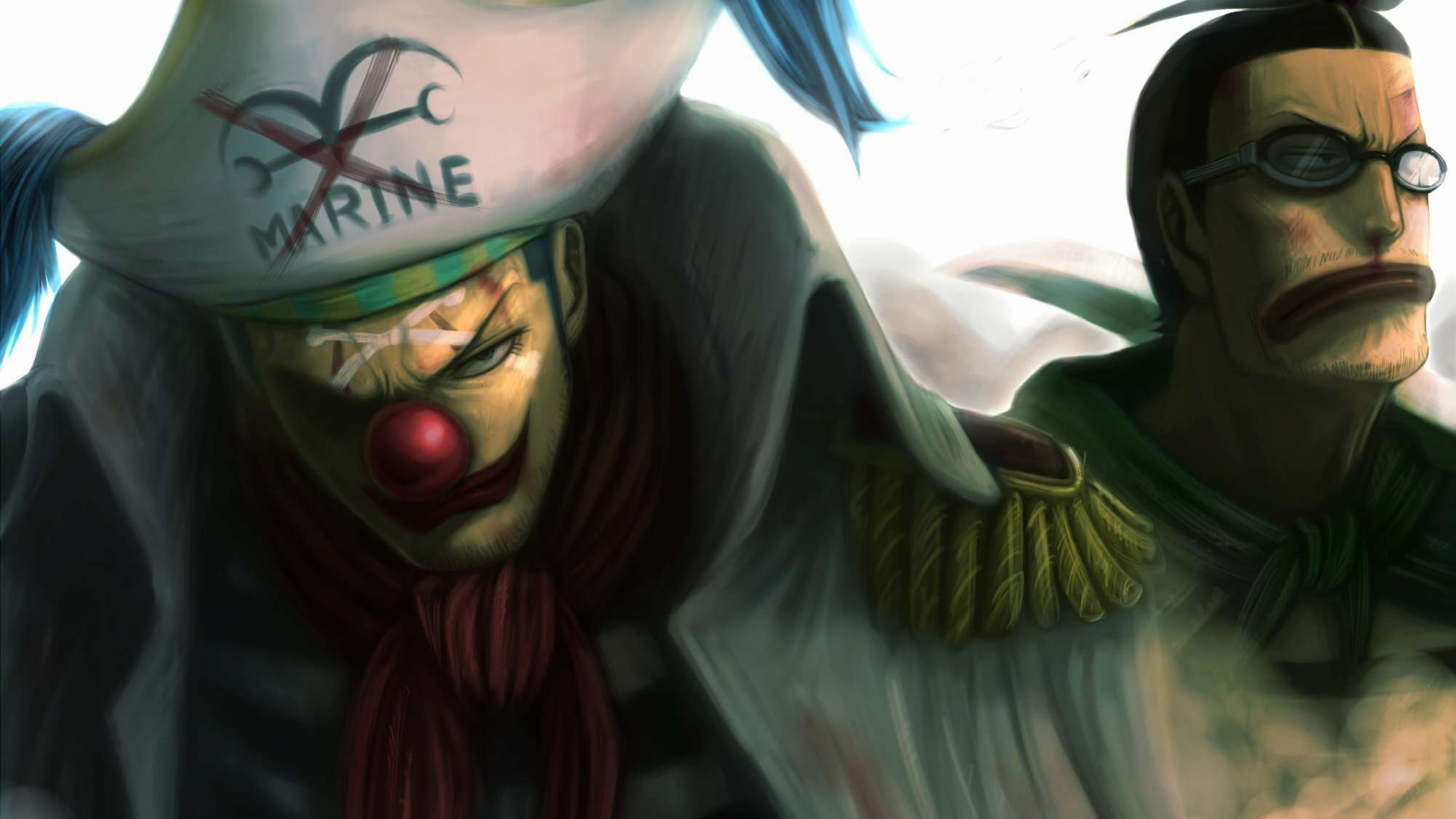 Details of One Piece manga chapter 1056: Buggy has now become a force that can confront the Marines

Switch the scene to Tokage Port. The three captains Luffy, Law and Kid are sitting together in the harbor. Law advised Luffy to postpone the departure date to another day, but Luffy complained that this is the day his crew decided to depart. Kid complained that he couldn’t understand how it was a coincidence to go out to sea on the same day. Then the three captains go into the screen choosing the path following the three magnets on the Log Pose of the New World and here we have three directions to go as follows: Northeast, East and Southeast.

Luffy and Kid both chose the East direction because they both thought this was the fastest route to accumulate Logs to set sail as soon as possible. But in fact, the Northeast is the route that can go to sea the earliest and Law teases both of the other young people. Because both of them share the same opinion, Luffy and Kid will have to play a lucky draw because none of the three will go the same way. Kid wins and is the one who will depart East. Luffy commented that he was the “Four Emperor” but lost and made Kid angry. But then Kid said that the one who couldn’t possibly be worthy of the title of Yonko was Buggy.

And here, the new newspaper with news about the “Cross Guild” organization of Buggy, Crocodile and Mihawk appeared. Luffy is surprised and wonders why it looks like Mihawk and Crocodile are Buggy’s subordinates. Zoro peeked in and commented that I don’t believe this case, especially about Mihawk here. Law commented that if Buggy was able to get the likes of Mihawk and Crocodile to submit, then he was worthy of the title of Yonko. But Luffy comments that Buggy is just an idiot.

Through Kid’s report about this organization called “Cross Guild”, they put up a wanted notice for the Marines. This makes the Navy fear when the Marines’ lives may be targeted by ordinary people. Law gives a copy of the Road Poneglyph to the Kid and says they deserve it. Killer commented that if they want to participate in the war to win One Piece, their crew should take the Road Poneglyh issue more seriously.

Kid asks Killer if Killer is implying that they should go find the “man with the burn”, although the Kid gang doesn’t know where the guy is. Luffy is curious about the character Kid just mentioned, and both Robin and Law are also interested in the matter. But Kid said he won’t reveal it, that’s for the best. Change the scene back to the capital. Momonosuke was calling out to see if Yamato had left too. Yamato was now standing on the roof of the Shogun’s Castle. Yamato shouted down to Momonosuke: It’s time for Yamato to sail with Luffy and it’s time for Yamato to live a life like Kouzuki Oden.

That is also the final development of One Piece chapter 1056. Next week the story is closed due to the influence of Obon Festival in Japan.